On a Tuesday evening in the spring of 2018 in Washington, DC, an energized group of District residents gathered to select the installer for the first solar co-op to be established with a grant award by Solar for All, a program of the District of Columbia’s Department of Energy and Environment (DOEE).  For some, this meeting represented an important milestone on a journey they never expected to be on.

The newly launched 51st State Solar Co-op will expand the benefits of going solar to low- and moderate-income (LMI) households. Through a combination of grant money from the Solar for All program and the use of 5 years of their Solar Renewable Energy Credits (SRECs), income-qualified participants will receive a solar installation at no cost.  By the Fall of 2019, the 51st State Solar-op will enroll up to 180 LMI single-family homes across the District.   The 51st State Solar Co-op is funded in part by a $2 million grant from Solar for All, a program created by the Renewable Portfolio Standard Expansion Amendment Act of 2016 that seeks to provide the benefits of solar electricity to 100,000 low-income households and reduce their energy bills by 50% by 2032. While the 51st State Solar Co-op is open to all District homeowners, grant funding under the Solar for All program will allow qualified low- and moderate-income homeowners to have their systems installed at no cost to them while still owning their system from day one.

“I’m thrilled to own a rooftop solar system,” reports Anna Butler, the first Solar for All qualified participant of the 51st State Solar Co-op to install her solar system. “Without the Solar for All program, and help from Solar United Neighbors, I would have never been able to start generating my own solar power.”

Back on that Tuesday evening, participants in the 51st State Solar Co-op selected EDGE Energy to install high-efficiency solar panels on their homes. The selection committee of co-op participants tasked with choosing the installer for the entire group was made up of residents from across D.C. and included both those who will pay the market rate to install their solar system and those who will have their system covered by the Solar for All program. By coming together as a group, all co-op participants were able to save money.  And those benefiting from the Solar for All program will see their electric bills cut in half because their solar arrays will not cost them anything. What’s more, the Solar United Neighbors co-op model ensures that decision-making power is in the hands of the co-op members. Members of the 51st State Solar Co-op are practicing energy democracy, saving money, and driving the District toward a cleaner energy future. 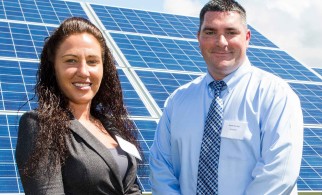 In the town of Gardner, Massachusetts, a community solar array on the site of a long-abandoned furniture manufacturing plant...