On a chilly morning in Lebanon, New Hampshire in late November 2018, state leaders, solar developers, and local residents gathered for a ribbon cutting ceremony on the state’s first solar array to be placed in a resident-owned manufactured housing community. The 384-panel joint array represented the culmination of efforts from state agencies, local nonprofits, and the Lebanon community, and would pilot an innovative approach towards removing barriers to solar for low-income consumers. The program’s success also highlighted the value of the resident-owned community (ROC) model in empowering low-income communities to make choices with their energy usage. 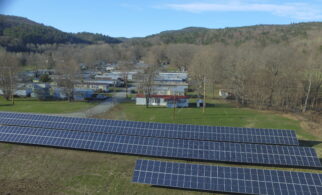 What are Resident Owned Communities?

Traditionally, manufactured homeowners do not own the land upon which their home is located but instead lease it from a lot owner. This model exposes residents to rent increases every year, and the money from these lot fees is sent out of the community. Residents are also vulnerable to losing their home should the lot owner decide to sell the property. Under a ROC model, residents of the manufactured housing community form a nonprofit cooperative entity. Each homeowner has equity in the co-op. Residents elect a board of directors from within the community who handle most decisions, but larger concerns (such as purchasing a solar array) are made by all residents. Members continue to own their home individually, as well as an equal share of the land beneath the community.

Benefits to the Model

The New Hampshire Community Loan Fund program was created as a valuable tool for preserving affordable housing in New Hampshire, while extending the benefits of homeownership to lower-income individuals. Since 1984, the New Hampshire Community Loan Fund and ROC-NH have been helping residents of manufactured housing communities purchase the land beneath their homes, and now they are helping communities access solar. The ROC model provides residents with several economic and social advantages over the traditional Investor Owned Community (IOC) model:

Land ownership and collective decision-making has the added benefit of empowering ROCs to make broader decisions for the well-being of their community, such as purchasing a solar array to subsidize costs. Mascoma Meadows, a ROC in Canaan, New Hampshire, did just that in 2018, becoming the first ROC in NH to go solar. The 384-panel joint array was built on a half-acre of land donated to the ROC by the neighboring Abundant Life Church of God. The array generates approximately 176,507 kilowatt hours of electricity annually and is estimated to save residents $270 annually on their electric bills.

The cost of the array was covered by a $168,000 grant from the Renewable Energy Fund managed by the New Hampshire Public Utilities Commission (NHPUC) and a private investor from solar developer ReVision Energy, who also installed the array, through a Power Purchase Agreement (PPA). Through the PPA, Mascoma Meadows can access the benefits of the array and in 2023 will have the option to purchase the solar array from ReVision at a discount supported by financing from the New Hampshire Community Loan Fund. The project was coordinated through the services of the New Hampshire Community Loan Fund, the Vermont Law School Energy Clinic, as well as the New Hampshire Sustainable Energy Association and Liberty Utilities.

Mascoma Meadows is a great example of how solar can be used to reduce the home energy burden for low-income communities while reducing their carbon footprint. The array also increases property values for residents while simultaneously bringing down lot fees. The power generated will be sold back to the grid, the profits of which will help reduce lot fees by about $22 per month. 5 However, the success of the ROC + solar model is contingent of several regulatory conditions being met:

ROC-Friendly Laws:
CHAPTER 205-A. New Hampshire housing and redevelopment law requires that any park owners who receive an offer to sell their land must give residents 60 days notice and the option to buy the land themselves. Owners are also required to inform the New Hampshire Housing Authority, who then contacts the New Hampshire Community Loan Fund.6 NHCLF has financed every single ROC in the state, either as the primary or a subordinate lender. Without their help, it is unlikely most manufactured housing communities would have the resources to create a co-op and buy the land beneath their homes. Several other states, including Massachusetts and Oregon, have similar laws, but New Hampshire’s is one of the oldest and strictest in the country.

Grant Financing for Solar:
HB 1116. In 2016, the New Hampshire legislature passed a bill requiring the NHPUC to develop alternative net energy metering tariffs. This process led the NHPUC to discover that net metering was not working well for the state’s low-income customers. To rectify this, the Commission determined that a percentage of Alternative Compliance Payments (ACPs) could be put towards low-income solar programs.7 Profit from the sale of ACPs goes directly to the state’s Renewable Energy Fund, which is administered by the NHPUC. Unfortunately, this is an unstable funding source, because ACPs are governed by the RPS, which changes every year.

SB 129. The passage of the New Hampshire Clean Energy Jobs and Opportunity Act in 2017 changed several aspects of the state’s Renewable Portfolio Standard (RPS) law enacted to, among other things, promote customer choice and energy independence by eliminating market barriers to solar energy that low-to-moderate income (LMI) residential customers face.8 The legislation specifically included a new funding allocation requirement for a program intended to increase the participation of low-income customers in the solar energy market. Specifically, 15 percent of the state’s Renewable Energy Fund would be disbursed annually to projects benefiting LMI customers, including community solar projects for manufactured housing communities. This requirement would create the mechanism which funneled ACP funds towards low-income solar projects brought on by HB1116. Ultimately, the Renewable Energy Fund dispersed $404,721 in grant funding to three projects, including the Mascoma Meadows project.9

Drawbacks to the Model

State-by-State Solar Regulations
State grants can be a valuable funding source for ROCs hoping to finance a joint solar array, but few public utility commissions operate funds like the Renewable Energy Fund. Additionally, few ROCs are likely to have the administrative capacity to be competitive in an RFP process; Mascoma Meadows was able to apply through additional support from the Vermont Energy Law Clinic.

The ROC is also caught in a vulnerable position because the solar is provided through a private contractual relationship, as opposed to a public utility bill. There is little to no oversight over this, so there is not necessarily a guarantee that all the benefits of the array are going towards the community. Additional regulatory steps would need to be taken to defend against this.

Finally, each solar project is subject to local municipal regulations which can complicate matters. For example, the city of Lebanon in which Mascoma Meadows is located is currently considering a revision of the local tax code. The revision would require taxing of solar arrays owned by third parties, which will impact the ROC’s array.

Resident Owned Community Regulations
ROCs are not everywhere in the U.S. and are reliant on state regulations to form and operate. Shifting an investor owned community to a ROC takes time, and relies on an existing sense of cohesion in the community.  Since 2008, the Mascoma Meadows community has operated through collective decision-making.10 Resident ties to the local community facilitated the donation of half an acre of land from the nearby Abundant Life Church of God, without which it is unlikely the co-op would have had enough land to support a profitable solar panel array. Replicating this program in an investor-owned manufactured housing community would likely undercut many of the benefits provided by the project in the first place. Increases in property value would not be evenly disbursed, nor would there be a guarantee that profit from the array would go back into reducing lot fees. Conversely, transitioning investor-owned utilities to a ROC model requires having:

Ultimately, this model will be most successful in existing ROCs. The state needs to have the right market and framework in place to support a project like this. In addition to regulations governing co-ops, if a state does not have the appropriate regulations around energy such as feed-in tariffs or net-metering, it may be impossible to replicate the Mascoma Meadows project. Moreover, because ROCs are a specific population, states may not have an interest in funding projects directed at them.

There are a number of benefits to combining ROCs and solar arrays. ROCs are an excellent way to remove barriers to homeownership and equity, while empowering residents to make choices for the well-being of their community. Solar can pair extremely well with this model, particularly in states with a supportive regulatory framework. There are gaps to this model that should be considered before applying it elsewhere, including how to replicate this model under a less solar-friendly public utility commission. Despite its narrow scope of applicability, this model can have substantial benefits when applied under the right circumstances, and it’s already being replicated. ROC-NH and the Vermont Energy Law Clinic have helped two additional communities apply for funding for solar arrays in the state.